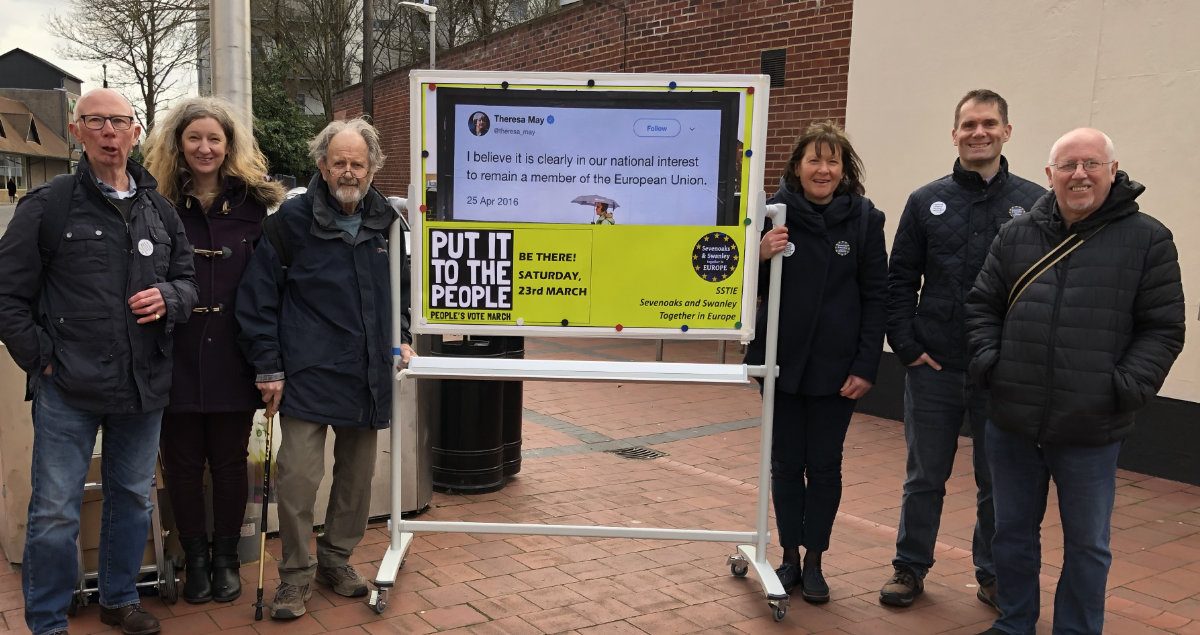 While we were setting up in Tonbridge at 1000, 4 members of the Tonbridge Labour Party, who were heading for a meeting in London stopped and leafleted with us for an hour. We very much appreciated this gesture.

Four members of Tonbridge & Malling For Europe also joined with us and again we were delighted to have their support.

Together with the 11 SSTIE members who were in Tonbridge on Saturday this made a  formidable leafleting group – so much so that one passer-by remarked that there were too many of us! We actually distributed many leaflets entitled  The lies and truths of the EU, Imagine If, and the Arrangements for the March on the 23rd.

Common themes on Saturday were:

a) that those Leavers who stopped and spent any time with us had not changed their mind since the referendum 2016.

b) those who refused to take leaflets did so politely; and

Our posters are taken from the Led  by Donkeys campaign 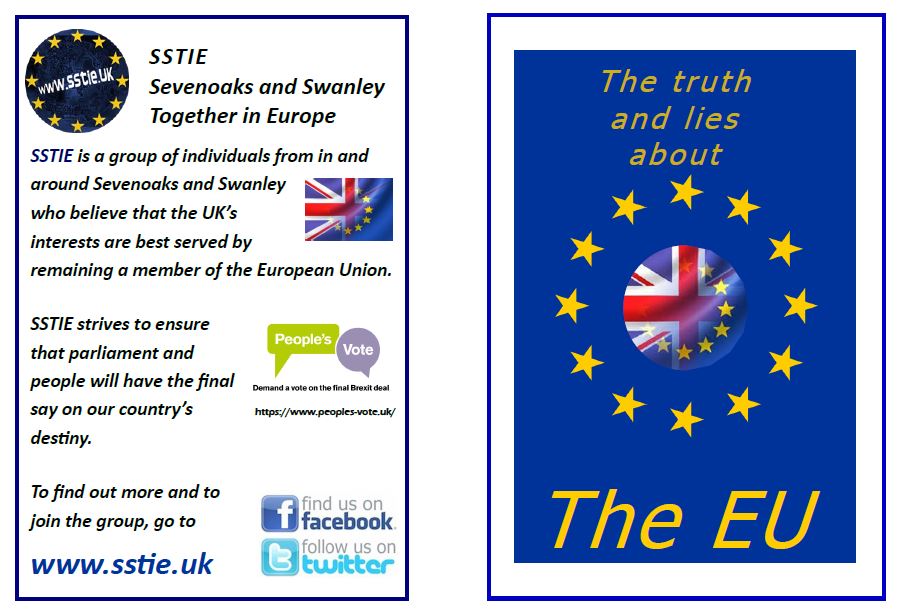 Our leaflets setting out lies and truths around the EU, and demanding a people’s vote have been updated to reflect the evolving mess around Brexit.

END_OF_DOCUMENT_TOKEN_TO_BE_REPLACED

Around 2,400 people filled Central Hall Westminster tonight to drive home the case – made by 700,000 marching on the streets three weeks ago – for the people to have a Final Say on any Brexit deal.

END_OF_DOCUMENT_TOKEN_TO_BE_REPLACED

One percent of the UK population converged on London this weekend in one of the biggest protest marches in UK history. Buses from Inverness, Truro and everywhere in-between. Standing-room only on Saturday trains to London. Expats flying home from across the continent to stand up and – finally – be counted. 700,000 people walked shoulder-to-shoulder to make our voice heard, and demand a people’s vote.

END_OF_DOCUMENT_TOKEN_TO_BE_REPLACED 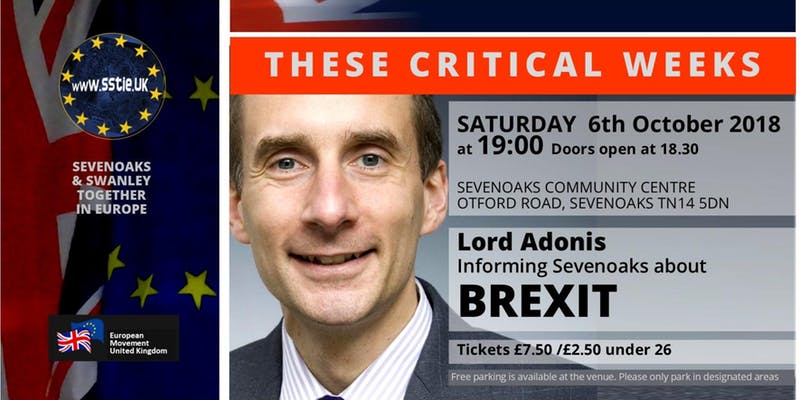 Lord Adonis will be speaking in Sevenoaks on Saturday 6 October about the state of Brexit in These Critical Weeks at the invitation of SSTIE.

END_OF_DOCUMENT_TOKEN_TO_BE_REPLACED

TW-IN presents a screening of “Postcards from the 48%” in the Tunbridge Wells Odeon on 23 September.

“When David Nicholas Wilkinson started working on the film in 2016, many people advised him to make a ‘Soft Brexit’ film, not a ‘Stop Brexit’ one. END_OF_DOCUMENT_TOKEN_TO_BE_REPLACED

Remainers overwhelmed at local support as nearly 250 turn up on Saturday 21st April to hear Professor A C Grayling say Brexit is not a done deal.

END_OF_DOCUMENT_TOKEN_TO_BE_REPLACED

On 28 February 2018, the following letter was presented to Kent County’s Council leader Paul Carter by 14 concerned groups from across the county.

END_OF_DOCUMENT_TOKEN_TO_BE_REPLACED

On Wednesday 28 February 2018, campaigners from across Kent descended from a familiar looking battle-bus to deliver a message to Kent County Council. This bus carried the slogan: “Brexit to cost £2,000 million a week” – a different message from its infamous predecessor! 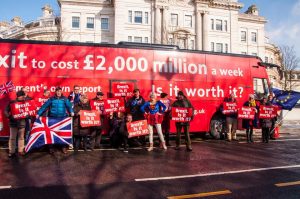 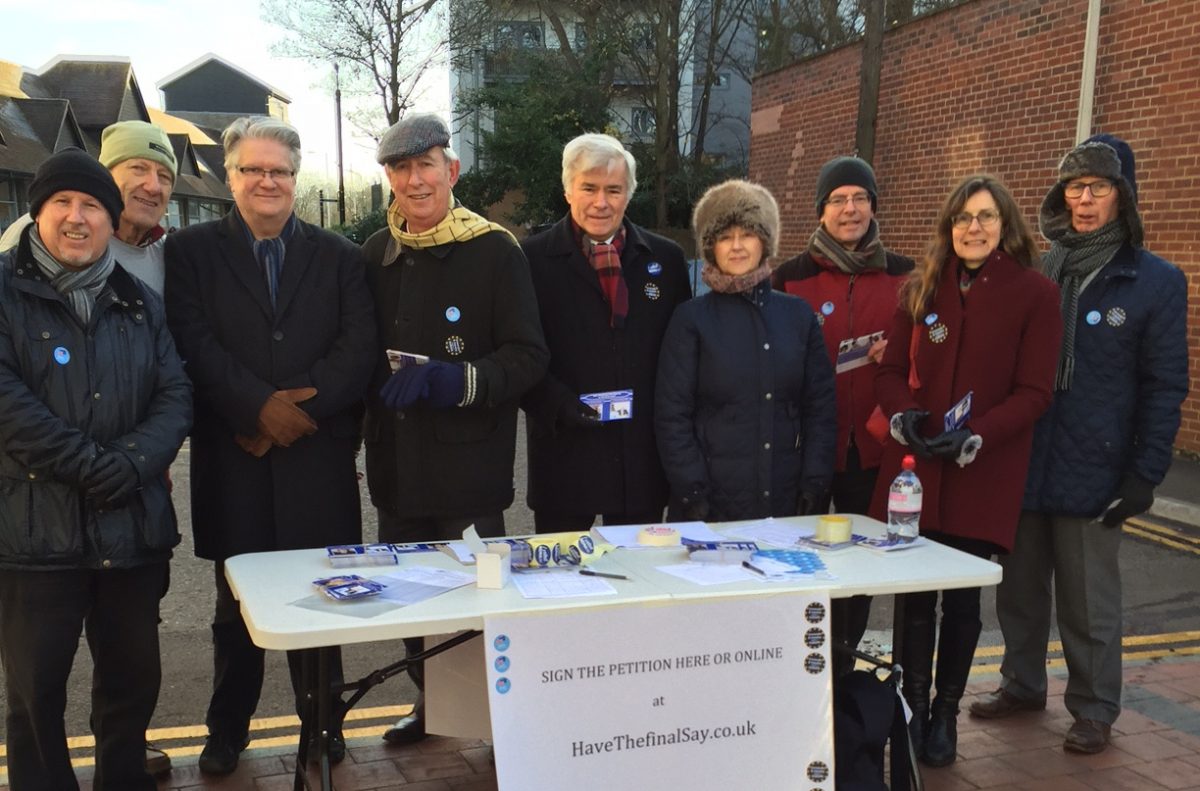 SSTIE were campaigning on the streets of Tonbridge for the first time on Saturday 9th December. We had 21 volunteers over 4 hours from 10 am to 2 pm, during which time we spoke to hundreds of people and we were pleasantly surprised by how positive the overall response was. 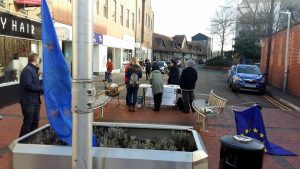 The majority of the people we spoke to think that Brexit is a mess and that it is not what people voted for – no matter how they voted in the referendum.

END_OF_DOCUMENT_TOKEN_TO_BE_REPLACED

SSTIE believes that the UK’s interests are best served by remaining a member of the European Union.
SSTIE strives to ensure that parliament and people will have the final say on our country’s destiny.

Join our Group
Come to an Event
Sign a Petition
more...